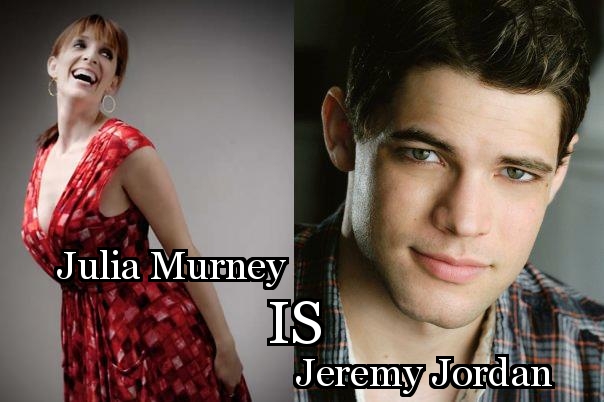 Due to scheduling, Jeremy Jordan is unable to appear in #SOBLESSED Live! at 54 Below on February 7th. We look forward to having him at a future engagement and are proud to announce that Julia Murney will be stepping into the role of Jeremy Jordan.

How did you prepare for your audition for Jeremy Jordan? I was offer only, but I’m very familiar with his oevre.

What did you sing for it? Meadowlark. In the shower.

Was Jeremy in the room during your audition or callback? I have a photo of him on my piano, so-yes?

Did you read with Laura Osnes, Katharine McPhee, or just a reader? Andy Mientus

How did you feel when you heard you booked the role of Jeremy Jordan? Soy blessed, of course.

How does Jeremy feel? He’s starring in the Last Five Years movie & the Parade concert, so I’m guessing he feels Jason Robert Brown-ish.

Are you familiar with Jeremy’s cannon of work? I don’t like firearms.

Are you a fan? I have a ceiling fan, yes.

Were you on Smash? smashed potatoes are delicious-will there be some at the concert?

Are you nervous to portray such a prolific performer as Jeremy Jordan? I feel like everything has led me to this point…and I plan on being drunk so I’ll have no recollection as to whether I blow it or not. It’s kind of my thing.

How do you plan to make the role of Jeremy Jordan your own, yet stay true to the character? Wait-does his wife know that making him my own is part of the deal? She’s really nice…I would never.

Would you consider this your Daniel Day-Lewis moment? I would love a milkshake, thank you.

Who will you be wearing? Vintage JJ, by Jeremy Jordan. Also, pajamas cause this concert is so damned late at night.